It is no secret that tick bites can spread diseases-Lyme at the forefront- to your family as well as your pets. What you may not know is that according to the CDC, they believe there are cases of Lyme, that go unreported as some are unaware they are infected. Aside from Lyme, there are also several other diseases that ticks can carry, a few include Ehrlichiosis-carried primarily by the Lone star tick-, Babesiosis and Rocky Mountain spotted fever.

According to an article on the Veterinary Practice News website, a few of the reasons that tick populations have exploded is due to warmer winters, an increase in deer populations, birds carrying ticks to new areas, as well as the use of fewer insecticides. The article also states that in order to reduce the number of ticks the temperatures would have to be sustained at 10° F for a long period of time. Large amounts of snow also do nothing to eradicate these pests, instead, it acts as a blanket. 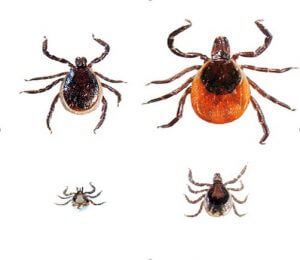 Ticks are arachnids and related to spiders and mites. They have four life stages, egg, larvae, nymph, and adult. The three stages that feed on blood typically have a preference of host or size of their host and differ in their preferred environments. Most ticks also overwinter in the larval or nymph stage, and once the weather is favorable, they will begin immediately searching for a blood meal in order to advance to their next life stage. Some ticks also “quest” in order to find a host while others such as the Lone star tick will actively follow a host once it has sensed they are nearby. Questing involves the tick perching on vegetation (or structure) with its front legs extended in order to latch onto a passing host. Ticks can also sense the approach of a host through carbon dioxide, vibrations, etc.

On Long Island, we typically deal with three types of ticks, the deer (or black-legged tick), the Lone star tick and the American dog tick. 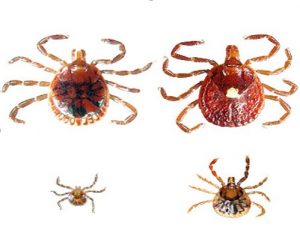 The deer tick is the smallest of the three and is the primary vector of Lyme disease but also carries the Powassan virus, Babesiosis, Anaplasmosis.  It prefers areas with moisture/ high humidity as they need to rehydrate their bodies frequently, making the edges of woodland or leaf litter, hot spots. White-tailed deer are the primary mode of dispersal for the adults, but it is believed that birds may aid in long-distance dispersal of immature life stages.

This tick passively quests or waits for a host to pass close enough so that they may attach themselves. According to the CDC, “Adult ticks may be out searching for a host any time winter temperatures are above freezing. All life stages bite humans, but nymphs and adult females are most commonly found on people.”

The Lone star tick, most commonly identified by the white dot on the female’s back, can transmit several diseases such as Ehrlichiosis, Tularemia, Heartland virus, and STARI (southern tick-associated rash illness). Alpha-gal syndrome (red meat allergy), has also been recently identified and is also associated with the bite of this tick. 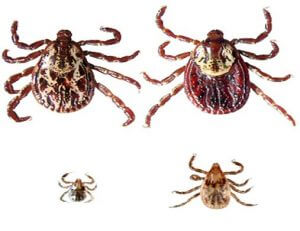 The Lone star tick can be found in areas with tall grass or low-lying branches/twigs and unlike the deer tick, is very resistant to desiccation. Organically Green had the pleasure to hear Dr. Moses Cucura, of Suffolk County DPW, speak on these pests and from his own personal experience and research has found that they are capable of following prey for up to 60’. The adults are active anytime the weather is above 38°F and prefer large hosts (humans, turkey, deer, etc) at all life stages.

The final tick we are going to discuss is the American dog tick which transmits tularemia and Rocky Mountain Spotted Fever. Overall, the populations are spotty on Long Island but they require an environment with high humidity and can be found in old fields, brushy woodlands, and along roadsides.

The larvae prefer rodents such as groundhogs and will frequently be located around their burrows. The adults prefer medium to large hosts such as raccoons, dogs, cats, and humans.  These ticks can survive at any given stage for two years if they are unable to locate a host.

Outside of taking the usual precautions—repellents (Permethrin clothing spray), checking yourself routinely, etc.—the CDC also recommends having a pesticide applied which can reduce the number of ticks by 68%-100%. 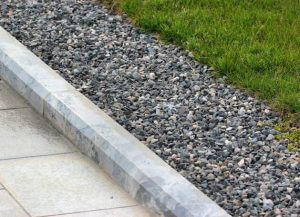 here are also a few cultural practices that can help reduce or discourage ticks:

Knowledge of ticks, the diseases they carry, and ways to reduce their numbers can lead to early detection and treatment. If infected, reducing the chance of having long-term effects of tick-borne diseases.