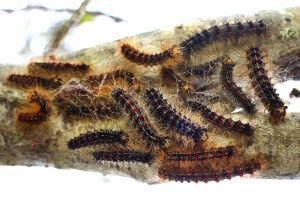 Trees are often known for their strength; however, even the strongest tree can be taken down by these tree killing pests. Here are just a few of the bugs that can destroy whole yards.

The Hemlock Woolly Adelgid is an insect native to East Asia, now infesting hemlock trees from New England to the Carolinas. The presence of white cottony/waxy tufts that cover their bodies can be found on the bark, foliage, and twigs of hemlock trees; this is a sure sign of infection.  The adult is less than 2mm long and wide so the white tufts are what make the insect noticeable against the dark needles.

The Emerald Ash Borer is a beetle from Asia that was first discovered in the United States in 2002. The larvae feed on the inner bark of ash trees, disrupting the tree’s ability to transport water and nutrients. While the larvae cause the most damage to trees, the adult beetles will graze on the foliage of the ash tree causing some damage.

To prevent the spread of the borer, the transportation of potentially infested firewood or lumber from these areas is prohibited with large fines issued to violators.

Gypsy Moths emerge from their eggs in early spring through mid-May and immediately begin feasting on trees. Feeding continues until mid-June or early July when the caterpillar enters the pupal stage emerging, finally, as a moth. They prefer to munch on the leaves of deciduous hardwood trees such as maple, elm, and oak. As it grows it will also attack evergreens like pines and spruces.

The name Tent Caterpillar comes from the tent-like nest caterpillars build, usually in a fork of a tree out of silk they produce. After feeding, the caterpillars return to the nest. It does the most damage to a variety of trees that include; Maples, Cherry, Oak, Sweet Gum, and many other popular trees of the Northeast.