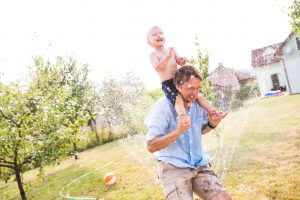 While summer may be winding down, fleas and ticks are still a problem for lovers of the outdoors all across the United States. Grassy and wooded areas are not only attractive places to take part in outdoor activities but also perfect tick habitats. The ticks that are most concerning and the ones you may want to focus your tick control on when it comes to tick-borne diseases are deer ticks and dog ticks. These ticks live off of blood meals from animals as small as mice and as big as deer. Dog ticks, in particular, are known for spreading Rocky Mountain Spotted Fever, while deer ticks can spread a number of diseases including Lyme disease, babesiosis, Powassan, and others. Treating your dogs and cats for fleas and ticks can help to keep these parasites out of your home, which is a good place to start in making your home safe.

The tick population at this time of year is quite high, taking tick control actions are important. Since they’ve had all spring and summer to hatch and grow so it’s very important when going outside to ensure that you’re wearing either insect repellent clothing which has been treated with Permethrin, or a tick repellent spray with the active ingredient DEET. Permethrin kills ticks after only 30 seconds of exposure, while DEET repels ticks, but may not be as effective as Permethrin clothing.  Because ticks spend the early part of their life cycle as nymphs living in leaf litter on the ground, protecting your feet and ankles is particularly important in preventing tick bites. Permethrin treated socks are a great way to avoid contact with and begin killing ticks before they get the chance to feed on you. While ticks are not born as disease carriers, if a nymph feeds on an infected animal (generally a mouse or a deer), it becomes a carrier. The disease can then be spread to other humans and animals from the bite of the tick. Because seed ticks (newly hatched ticks) infest an area when they hatch, they are very likely to be able to get a blood meal quickly and to become vectors of disease which can endanger humans and other animals.

While we all want to prevent tick bites, sometimes spraying and even putting on socks is more effort than we’d like to expend. Having your yard regularly treated for ticks by a professional such as Organically Green Horticultural Services can help to ensure that you don’t end up as a meal when you’re outside having a barbeque or just playing with the kids.