Besides Lyme: Other Dangerous Tick-Borne Illnesses 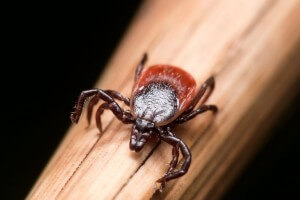 Most people on Long Island are aware of the dangers of Lyme Disease and the ticks that carry them, but did you know ticks can carry several other dangerous diseases, some of them life-threatening? Here is a list of other dangerous tick-borne illnesses that pose a threat.

Tularemia is transmitted to humans by the dog tick, the wood tick, and the lone star tick. Tularemia occurs throughout the U.S.

Tularemia is a disease of animals and humans caused by the bacterium Francisella tularensis. Rabbits, hares, and rodents are especially susceptible—and often die in large numbers—during outbreaks. Humans can become infected through tick bites.

Symptoms vary depending on the route of infection. Tularemia can be life-threatening in humans, however, most infections can be treated successfully with antibiotics if caught early enough.

STARI (Southern tick-associated rash illness) is transmitted via bites from the lone star tick, found in the southeastern and eastern United States. The rash of STARI is a red, expanding “bulls-eye” lesion that develops around the site of a lone star tick bite. The rash usually appears within 7 days of the tick bite and expands to a diameter of roughly 3 inches or more. Patients may also experience fatigue, headache, fever, and muscle pains. The saliva from lone star ticks can be irritating; redness and discomfort at a bite site does not necessarily indicate an infection.

STARI is diagnosed on the basis of symptoms, geographic location, and the possibility of tick bite. Unfortunately, the cause of STARI is unknown and therefore no diagnostic blood tests have been developed.

It is not known whether antibiotic treatment is necessary or beneficial for patients with STARI. Nevertheless, because STARI resembles early Lyme disease, physicians will often treat patients with oral antibiotics.

Powassan disease cases have been reported primarily from northeastern states and the Great Lakes region.

Powassan (POW) virus is transmitted to humans by infected ticks. Most cases have occurred in the Northeast and Great Lakes region. Signs and symptoms of infection can include fever, headache, vomiting, weakness, confusion, seizures, and memory loss. Long-term neurologic problems may occur. There is no specific treatment, but people with severe POW often need to be hospitalized to receive respiratory support, intravenous fluids, or medications to reduce swelling in the brain.

Ehrlichiosis is transmitted to humans by the lone star tick, found primarily in the south central and eastern United States. Typical symptoms include; fever, headache, fatigue, and muscle aches. Usually, these symptoms occur within 1-2 weeks following a tick bite. Ehrlichiosis is diagnosed based on symptoms, clinical presentation, and later confirmed with specialized laboratory tests.

Babesiosis is caused by microscopic parasites that infect red blood cells. Most human cases of babesiosis in the United States are caused by the black-legged tick, found primarily in the northeast and upper midwest.

Many people who are infected with Babesia microti feel fine and do not have any symptoms. Some, however, develop nonspecific flu-like symptoms; such as fever, chills, sweats, headache, body aches, loss of appetite, nausea, or fatigue.

Because Babesia parasites infect and destroy red blood cells, babesiosis can cause a special type of anemia called hemolytic anemia. This type of anemia can lead to jaundice (yellowing of the skin) and dark urine.

Babesiosis can be a severe, life-threatening disease, particularly in people who:

The best way to prevent tick-borne illness is to prevent the ticks themselves. Regular tree spraying and tick control treatments will help keep ticks and the diseases they carry out of your yard and away from your family and pets.