All is Merry & Bright: A Brief History of Christmas Lights 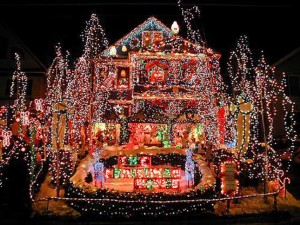 Light has always been an important part of the holiday season. For centuries people would decorate their Christmas trees with lit candles. As you can imagine, fire on a dry pine tree is just a massive fire waiting to happen and they did often.

In 1900, eight years after General Electric purchased the patent rights to Edison’s bulbs, the first known advertisement for Christmas tree lights appeared in Scientific American Magazine. They were so expensive that the ad suggests renting lights for a holiday display.

Within fifteen years the demand for Christmas lights skyrocketed and thus a billion dollar industry was born.

The basic foundation of the Christmas light, the incandescent bulb, hardly changed for nearly a century, and is only now undergoing is first major revolution, as we start replacing our old incandescent lights with energy-efficient LEDs. Yet, in that same time, we’ve gone from sticking burning candles in a tree to creating massive, computer-controlled—and completely excessive—light displays that are becoming increasingly popular.

If you want to decorate your home like Clark Griswold without having to spend an entire weekend on a ladder in the freezing cold, you can always call Organically Green (631) 467-7999.