What to Plant in the Fall 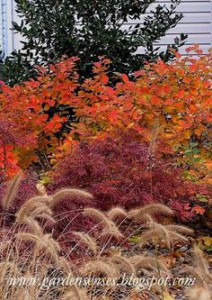 Pumpkin Spice is out and it’s getting cooler. Fall is officially on its way.  If you’re wondering what to plant in the fall, the answer is almost anything. Here are six plant types to put in the ground during the fall.

The cool Autumn air temperatures are easier on both plants and gardeners. The soil is still warm, allowing roots to grow until the ground freezes unlike in spring when plants have to wait for the ground to thaw.

The weather in fall also makes it a prime time for gardening, more sunshine days than in the rainy spring.

Pests and disease problems start to decline as it gets colder. You don’t need fertilizer, either. Fertilizer promotes new, tender growth that can be nipped by winter weather; stop fertilizing by late summer.

The window for fall planting ends about six weeks before your area gets hit with a hard frost, usually September or October. Here are some great plants that do well in the fall.

All spring-blooming bulbs need a period of cold dormancy to bloom. Plant bulbs in fall to ensure a beautiful spring display.

Pansies do very well in the autumn months. By planting in fall, you’ll get two seasons of enjoyment out of these cool-season favorites. Fall is the best time to plant pansies because the still-warm soil temperatures give their roots time to establish.

Lettuce, spinach, and other greens with a short maturity time can be planted later in the season.  You can extend the growing season by planting them under floating row covers or cold frames that will shield plants from frost.

Fall is the best time for lawn care. Grasses such as bluegrass, fescue, and ryegrass should be fertilized in early September and again in late October or early November to give a boost for earlier spring green-up.

Fall is an ideal time to plant trees and shrubs because the soil is still warm enough for root development.  Keep newly planted trees or shrubs well watered until the ground freezes so they get a good start before going into full dormancy during winter.

It’s fine to plant perennials in the fall, especially specimens with large root balls such as peonies, irises, and chrysanthemums.

Any fall-planted perennials should be carefully watered until the ground freezes to keep their roots healthy and strong.